Temidayo Kafaru, aka Lascatter, reacted to accusations from his estranged wife of molesting their 5-month-old child barely one year after their wedding.

Kafaru, in a five-page petition signed by his lawyer, Omo-Elo Akokaike Esq., a Senior Associate at Regency Law Firm in Lagos, described Diana’s allegations as defamatory and sheer wickedness which should be discarded.

The petition reads: “We wish to state to all and sundry that the publication made Diana Faith Logico and her mother, Edwina Logico, against Temidayo Lucky Kafaru are not only defamatory but sheer wickedness and all right-minded Nigerians should discard the make-belief story which has brought public opprobrium against our Client and treat the same as sheer blackmail and an abysmal campaign of calumny against our Client.

“These false stories will expectedly continue to flood the social media in order to damage our Client’s reputation, blackmail and intimidate him.

“Furthermore, Mrs. Edwina Logico and Diana Faith Logico have recently also flooded our Client’s place of work using the Coordinator of Domestic and Sexual Violence Response Team (DSVRT) of Lagos State reporting these very false allegations to his boss. The persistence of these unfounded actions by our Client’s wife and mother has made our Client very fearful for his life and safety.

“Therefore, we appeal to the general public and the law enforcement agents to come to the aid of TEMIDAYO KAFARU and protect him from the venomous fangs launched against our Client and her sworn determination to completely destroy the reputation and life of our Client like she has done to her erstwhile sons-in-law while the law takes its course,” the petition alleged.

Diana, who got married to Kafaru on August 31, 2019, in a flamboyant society wedding, recently accused her estranged husband of sexual molestation and rape. Diana’s legal counsel, Bamidele Ogundele, was also said to have reported the case to DSVRT at Alausa in Ikeja.

But, Kafaru’s lawyer rubbished Diana’s statement, describing it as cheap blackmail. He emphatically cleared the air around each and all the allegations that he had carnal knowledge of his house help or was engaged in unnatural acts with his own child.

He took the general public down to the memory lane, alleging that Diana’s mother has a trademark in marriage racketeering and blackmailing.

The lawyer explained that family members, friends, colleagues and business partners could testify to Kafaru’s upright character and hardworking prowess which he has built over the years.

The petition alleged: “Our advice to the general public is based on solid and convincing evidence of repeated antecedents and patterns of behaviour usually exhibited by Mrs. Edwina Logico and her daughters in the past against men who had dared to break from marital relationship with Mrs Logico’s daughters due to their compulsive, irrational behaviour and gross lack of character.

“The antecedents and facts are as elucidated below:

i. In 2014, the same malicious threats, invectives, blackmail and character assassination to which our Client is now being subjected were also marshaled by Mrs. Edwina Logico and her daughters against one Deji Falope who was engaged to one of the daughters, Ms. Divine Logiccco, simply for the reason that he could no longer accede to their outrageous demands and irrational behaviour.

The young man with so much potentials in the Media industry had to quit his avowed profession because his reputation was badly battered by this same Mrs. Edwina Logico. The details of that dispute were well reported in the social media.

ii) Further, in 2011 Mrs. Edwina Logico and her daughters also unashamedly launched a campaign of calumny, vilification, blackmail, arrest and detention against one Mr. Chris married to her first daughter, Toyin Adekunle who is still serving his jail terms at Abuja Prison.

iii) In addition, the father of the two daughter of Mrs. Edwina Logico was also accused by this same mother-in-law of impregnating his own daughter which lend credence to the fact that the Logico family thrives in cases of sexual molestation and unfortunately, our Client is their next victim.

iv) A cursory glance at the stories would show that Mrs. Edwina Logico and her daughters (The Logico’s Family) have well-rehearsed template for threatening, blackmailing and dealing with men married or about to be married to the daughters who can no longer cope under the heavy burden of their irrational demands and obsessive behaviour.

v) In all of the above antecedents, Mrs. Edwina Logico and her daughter Diana Logico template is to flood the social media with all forms of unimaginable accusations of unnatural human behaviour against her sons-in-law and instigate law enforcement officers to frustrate her in-laws who have had the misfortune of getting married or engaged to them.

vi) It is worthy of note that Temidayo Lucky Kafaru had unwavering and undaunted love for his Son and cannot descend to such bestiality against his own son as heinously alleged by his estranged wife. The purported allegation of Child’s molestation is a figment of Mrs. Edwina Logico and Diana Logico wicked and deranged imagination.

vii) The rhetorical question to ask is why did Diana Faith Logico wait until the marriage had broken down irretrievably before the LOGICOS decided to invent these unwholesome allegations of rape of an un-existent minor as well as Child molestation against our Client.

viii) The present attacks against our Client is another episode in the series of the family’s well-rehearsed script of dealing with sons-in-law who could no longer meet their outrageous financial demands or bear the weight of their irrational behaviour which is not new.”

Recounting the genesis of the marital woes, the issue of DSVRT among other allegations, the petition stated thus: “Our Client’s marital woes started sometime in April 2020, when he was arrested by the Divisional Police Officer (DPO) at Ajiwe Police Station, Ajah, Lagos State based on trumped-up charges of assault levelled against him by his wife Mrs. Diana Faith Logico under the instigation of her mother Mrs. Edwina Logico simply because our Client refused to accede to the incessant outrageous monetary demands to which he had been subjected since the marriage which had become overly burdensome to him due to the crushing effect of the pandemic.

“Due to those gruesome antecedents of our Client’s Mother-in-Law and her daughters with respect to her wanton display of savagery against perceived erring sons-in-law, it became expedient that we swiftly seek the intervention of the Inspector General of Police and by another Petition made to IG in August 2020, we implored the Inspector General of Police to wade into the matter in order to save our Client’s life.

“Hence, it is extremely preposterous for Diana Faith Logico to now be calling on the IGP when the Inspector General of Police has since on the 1 of August 2020 directed that all the Petitions from Temidayo Kafaru and Diana Faith Logico Kafaru be investigated by the Assistant Inspector General of Police, Zone 2, Onikan, Lagos State. In line with the directive of the IG, Temidayo Kafaru and his estranged wife, Diana Faith Logico, had the first interview on the 2 day of September 2020 with very high profiled Police Officers without mentioning both false allegations.

“On that fateful day, the Police Team interviewed Temidayo Kafaru, his estranged wife Diana Faith Logico and Mrs. Edwina Logico. Diana Faith Logico could not provide evidence of the sexual assault. But was rather trying to make peace with our clients and requesting for monetary support.

“At the end of the first interview, both parties were instructed to report to the Police Station on the 15 day of September 2020 for further questioning and more investigation.

“The Police Officers in charge of the case showed very high-level of professionalism in the course of the investigation that Temidayo Kafaru who was highly incensed by the phantom case of rape of the housemaid and child molestation to refrain from any verbal confrontation.

“On the 15 day of September 2020, Temidayo Lucky Kafaru and members of his family reported to the office of the AIG for further questioning but his wife and mother failed to show up. We later discovered that Diana Faith Logico and her mother, Mrs. Edwina Logico, orchestrated another plan with the Coordinator of Domestic and Sexual Violence Response Team of Lagos State as well as the Director of Public Prosecution at the Lagos State Ministry of Justice to take over the case from the Nigeria Police in a bid to charge Temidayo Kafaru to court without waiting for the outcome of the ongoing investigation at the Assistant Inspector General of Police Office at Zone 2, Lagos State.” 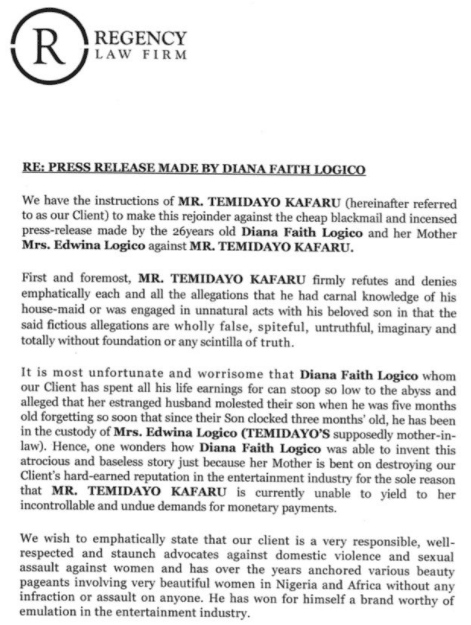 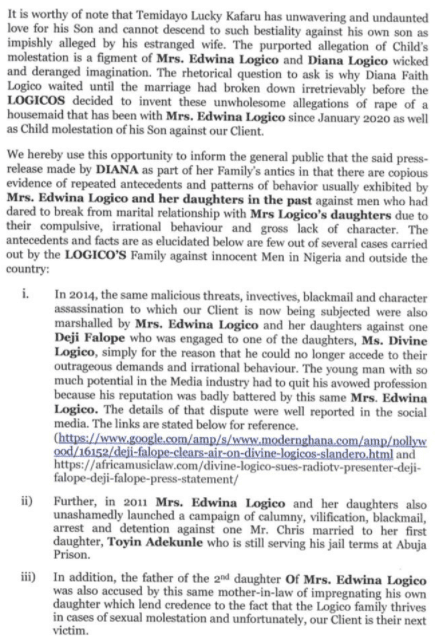 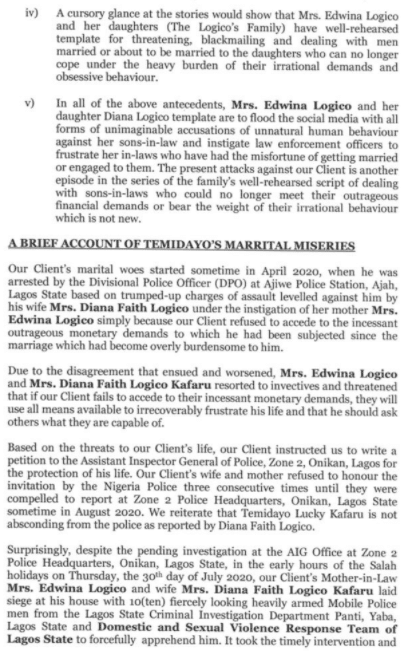 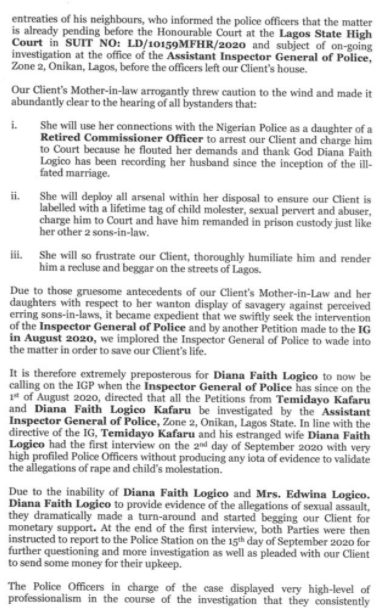