A domed Ethiopian Airlines flight swerved and dipped and was belching smoke from the rear before it crashed with 157 on board, a witness said today.

He also said the Boeing 737 Max 8 jet was making a strange noise before hitting the ground with a “large boom” and a shower of flaming luggage.
Crash investigators today recovered the black box flight recorder from a crater the size of a basketball court.
They hope it will yield clues to why the brand-new plane crashed yesterday killing all on board including seven Brits.
Eyewitness Gebeyehu Fikadu, 25, told CNN he saw it come down while collecting firewood with other locals.

He said: “I was in the mountain nearby when I saw the plane reach the mountain before turning around with a lot of smoke coming from the back and then crashed at this site.

“It crashed with a large boom. When it crashed luggage and clothes came burning down.

“Before it crashed the plane was swerving and dipping with a lot of smoke coming from the back and also making a very loud unpleasant sound before hitting the ground.”

Crash investigators from the US National Transportation Safety Board will arrive tomorrow to help piece together what went wrong, the US ambassador to Ethiopia said.
Meanwhile Indonesia became the fourth country to ban all Max 8 jets from flying over safety concerns. Another plane of the same model crashed near Jakarta in October. 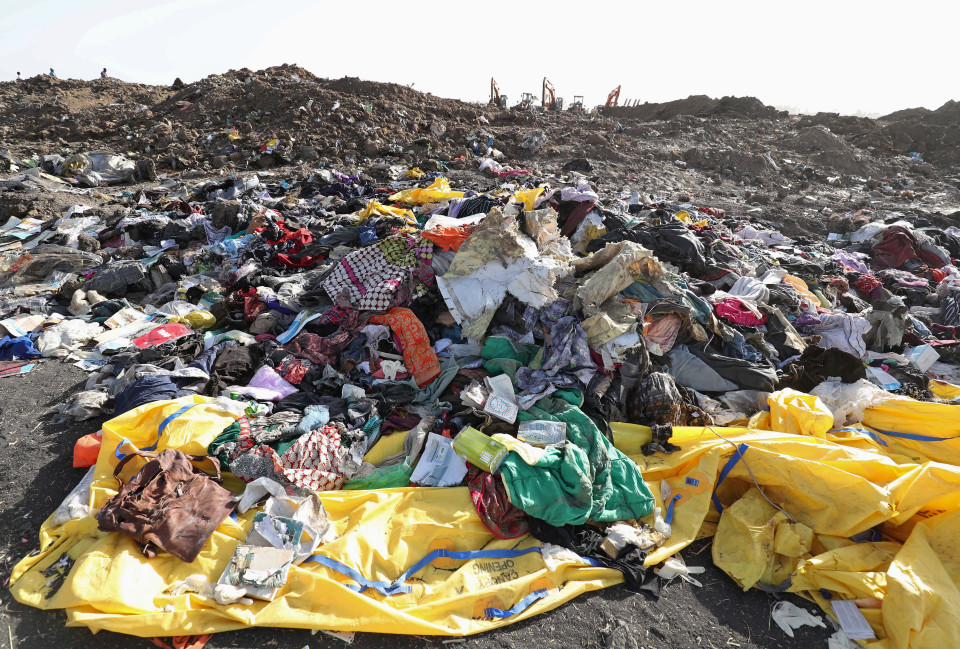 Passengers’ clothing and personal effects gathered into a pile at the crash site today
Aviation expert Mary Schiavo said Boeing should ground all the jets until they know what went wrong.

The 737 Max series, introduced only two years ago, is Boeing’s fastest selling model.
American Airlines, which has ordered more than 100, said it has “full confidence” in the planes but Beoing’s share price plunged ten per cent following the disaster.
***
Source: The Sun UK